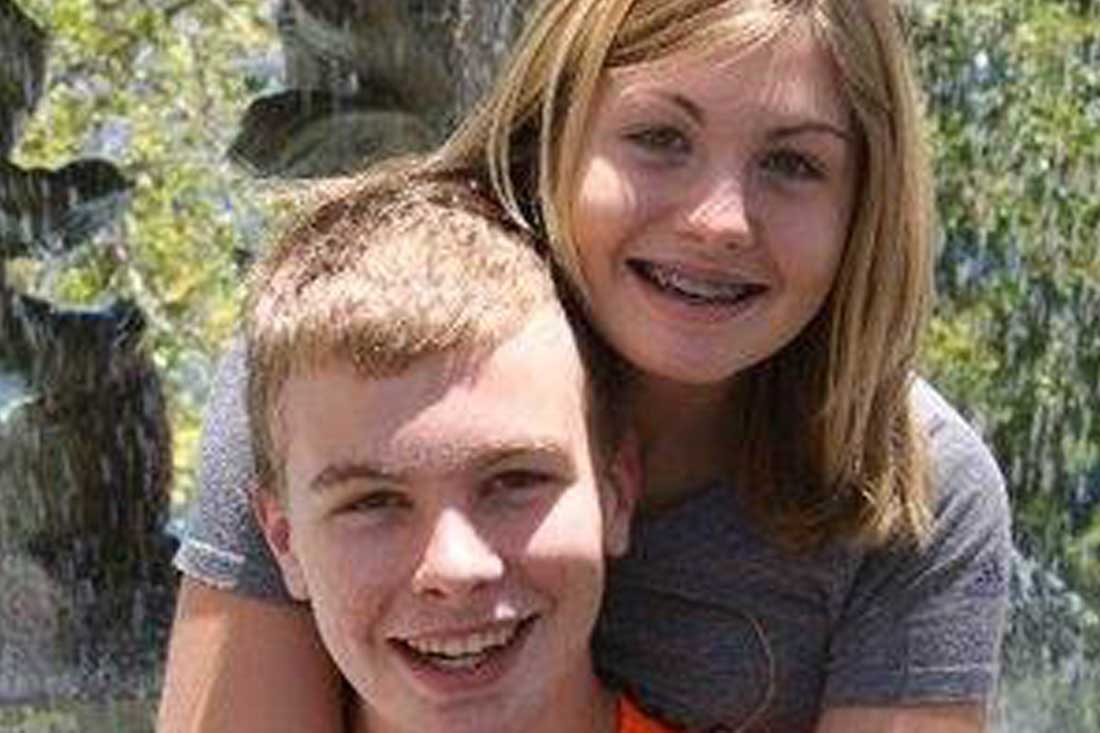 Disclaimer: This is from my point of view. I do not speak for any other part of my family, just myself.
-Austin Pearson

When you’re a 15 year old girl your main concerns are probably going to be about boys, what friends are going to being in your classes for the upcoming year, and that your next birthday can’t come fast enough because you are so close to freedom. Well, driving freedom that is. Those were the things on my mind. No major issues. Just normal teenage girl problems. Nothing major. Never in a million years did I think I would have to watch my older brother battle brain cancer.

It was supposed to be a really great day. I had plans to to go to the amusement park with a good friend of mine and her family. I woke up excited, the sun was shining, nothing could ruin my day. My dad and step mom had already left so it was just my brother, David and I. I remember him sitting in the chair that my dad had rocked both of us in when we were babies, his eyes were shut and he had this pained look on his face. If you knew my brother you knew this wasn’t normal. I had asked him what was wrong, worried about my brother. He told that it was a head ache. That it was the same level of pain he had a few days before. Then he was on the floor because the pain was so strong. I had asked him if I could get him Advil or water or anything that would help the pain. He asked for water. I got him a water bottle so he didn’t have to worry about spilling. I asked him if he wanted me to stay home to look after him but he said no, he wanted me to go out and enjoy the last few days of summer. So I did. I worried the whole way to the amusement park and I kept thinking ‘I should be at home,’ ‘What if his headache gets worse and no one is there?’ I stopped thinking after the first rollercoaster of the day. I had the adrenaline going through me and I was just…excited. Mind you, David was always in the back of my mind but he wanted me to have fun so I did. We were there all day. Laughs and wonderful memories were made. When we were done, we all piled in the car to head back home.

If you haven’t been on interstate 95 during rush hour, you are very lucky person because I could have probably walked home faster! But there we were bumper to bumper on 95, listening to the radio and talking about anything. I had texted my dad saying I was on my home. Then, we heard sirens that were coming from the opposite side of the road. I had a sickening feeling that something wasn’t right when the ambulance passed. Not a second later I got a text from my dad saying that he and David were on an ambulance on their way to the ER in Richmond and that my step mom would meet me at home. My heart dropped. My friend asked me what was wrong and I told her that the ambulance we saw had my brother and father in it. I laughed it off like it wasn’t a huge deal. But I had no clue what was going to come.

Fast forward a few days..maybe it was weeks. It certainly felt like weeks. I hadn’t seen my mom or dad all that much. I had my step parents and stepsister, Kelly but it wasn’t quite the same. During this time I spent a weekend at Kelly’s dad’s house. Weird right? At first it was but everyone there took me in and made sure I felt at home. I can’t remember if I ever really thanked them for that weekend but I really appreciated a little bit of a different kind of normalcy. But that ended when my step mom and my step dad came to that house.

They came and everyone, all the step brothers and the step sister of my step sisters, gathered in the living room. The one that was foreign to me. We all sat on the various couches and chairs, while my step parents sat on the coffee table facing all of us. I knew it wasn’t going to be good because my parents were nowhere to be seen. I can’t remember who broke the news, most things were a blur after I sat down. When the news that my brother had cancer, I remember wanting to run. I imagined running down the street screaming why with tears down streaming down my face. I don’t remember if i actually cried or not but what I do remember is my older sister, Katie, breaking down first. Kelly followed. After that, I think we went to the hospital. So I could see my family, well my starter family anyway. My family has grown since.

What I remember of the hospital visit is that I had a talk with my dad and David was trying to stay his upbeat an positive self. I remember my dad saying what David thought of the news. My dad told me that one of the things that David said when he first found out that he had brain cancer is, he was glad it was him instead of one of his sisters. Now if that doesn’t win best brother of all eternity, then I don’t know what does.

After that I had adjusted to a new normal. It consisted of me going to school and having people not knowing what to say to me, my parents worried sick about my brother, my step parents trying their hardest to keep everything normal and being supportive to my parents, and David being gone for different trials a lot and being home schooled with the world’s most caring and wonderful teacher. He had gone through so much but he tried to make it seem like he was okay, that he was going to be back on the water skis in no time.

My last birthday with my brother was my 16th. And it’s one of my favorites. His Make-A-Wish trip fell on my birthday weekend. He wanted to meet Gordon Ramsey. And he did. He smiled so big when he got to sit in Hell’s Kitchen and have dinner. He got to sit and talk to Ramsey himself. David got a signed cook book and I got to spend my birthday on Universal’s Boardwalk, have dinner at Hell’s Kitchen, and watch my brother have the best time of his life.

David fought longer than the doctors had thought. He fought hard from 2010 to 2012. His funeral celebrated his life. All of our friends wore Hawaiian shirts in his honor. So many people came. And that’s when I realized how many lives my brother touched. He was such a wonderful person. He wasn’t perfect, but he was perfect for my world. He taught me so much. He taught me to fight, how to be comfortable in my own skin, not to care what any one else thought, and how to be grateful for every day.

Now here I am. 21 years old and living life how I want. I’m happy. I may not love the state I live in, but I love my job, my apartment, my boyfriend, the friends who have stuck by my side through everything, and my family who may not love my decisions but support me any way. I would have loved to see David get married or be obsessed with Pokemon Go, instead he gets to see me do all those things. David will live on. We may not be able to see him, but I promise he’s there. He’s making lame jokes, saying sarcastic comments, and making all the good Pokemon run away.